reply to a tweet or add a new one

Haven't heard of an ADR before?

no storyboard, and select uses of interface builder

I had to learn constraints to handle the layout of the items in each tweet cell correctly. However, I started out by using [UIView initWithFrame] to layout the components. Starting out, I made a number of bad assumptions about the placement and sizes the UITextView. These assumptions turned out to be bad and weren't very easy to remove. I rebuilt the UITextView using constraints for the layout. Using constraints solved problems with TweetCell layout, heightForCellAtIndexPath calculations in HomeTableViewController and layout of the TweetDetailViewController.

Not using the UITableView's reusable cells was a hack to get around all the issues that arose when reusing a cell with a different layout. Specifically, the retweet header got re-used for a cell without a retweet; it would look ugly and the height calculations would be off. By fixing the mixture of hard coded frames & constraints (discussed above in NSLayoutConstraints), and adding a[TweetCell clearUnused subviews] I was able to solve that probelm. The scrolling in the app is noticably smoother & quicker with the reusable cells.

Twitter doesn't currently support the OAuth2 spec, so we can connect only using OAuth1. AFNetworking 2.0 does not support the AFOAuth1Client, so (@timothy1ee, who wrote the OAuth code I'm using) was forced to use AFNetworking1.3 instead. I could have updated AFNetworking to 2.0 and use BDBOAuth1Client instead, but decided just to stick with the provided code.

I wanted to handle the touch events on the UIImageViews themselves (the reply, retweet & favorite buttons), but couldn't get the UIGestureRecognizer to fire on my delegate UITableCellView. Instead, I chose to capture all gesture events on the entire cell then calculate the area for the clicked button. This became even more difficult when I wanted to handle the selection of the cell to load the TweetDetailViewController. I had to handle the TweetCell selection through message passing from the handler in the TweetCell.

I decided to separate the creation & setup of TweetCell subviews into a separate class for portability; I wanted to re-use the code in the Detail View. But, the Detail View is slightly different; the layout of the same components is different and there are additional subviews to add. I subclassed TweetView into ShortTweetView & FullTweetView, to be used by the TweetCell and DetailView, respectively. This allowed me to share much of the setup & organization, while still offering each it's own layout & unique behavior. This view heirarchy was great when I wanted to add the updating of retweet and favorite counts on a click of the favorite & retweet buttons. I could just override the superclass's default setRetweet & setFavorited methods, call the superclass's implementation and add the child class's extra updateCountLabelsWithTweet method. 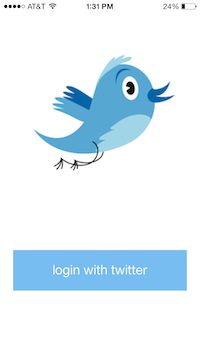 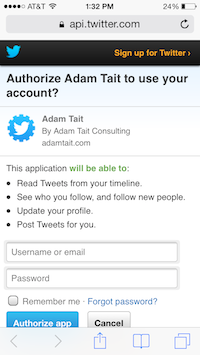 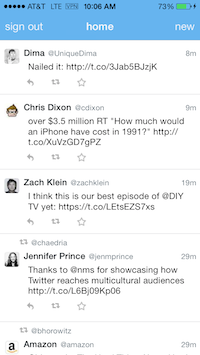 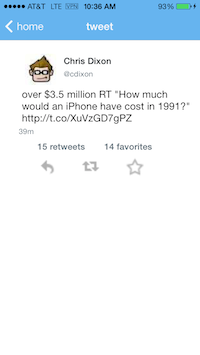 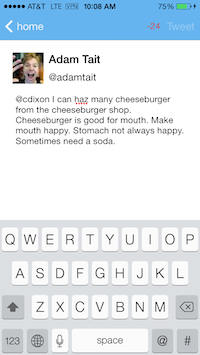